• Becoming a member to the IKFB e.V. 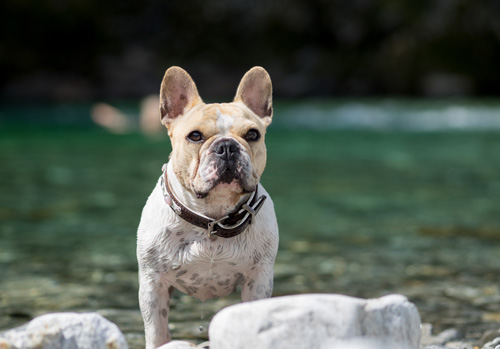 The Internationale Klub für Französische Bulldoggen e. V. (IKFB) was founded in 1909, therefore one of Germany's oldest breeding clubs for dogs. The club is a member of the VDH (Verband für das Deutsche Hundewesen) and the FCI (Fédération Cynologique Internationale).

As the nationwide oldest association with a stud book recognized by the VDH, the IKFB is responsible for the observance of the worldwide valid breed standards and the purebred breeding of the French Bulldogs. The focus is on health of the animals and the knowledge of the dangers that exist in the breeding of short-nosed breed dogs in general.
The approximately 70 IKFB breeders breed as a hobby with a lot of passion for the breed, they all do not breed commercially. Dog traders and commercial breeders will find no place in our club. The IKFB distances itself ourselves expressly from these »professional groups«.

With around 450 members of the IKFB forms a strong community that is organized in local groups. All office-holders and officials of our club are volunteers, of course.
The official club organ is the VDH magazine »Unser Rassehund«.

There are many reason to become a member to the IKFB. Our members particularly appreciate the community of friends of the breed, they are sharing with health professionals, helping them acquire and raise their bully and much more.

The IKFB is the oldest VDH member association representing the interests of the Bullys and their owners since 1909. The club has a lot to offer for his members.
We look forward to you!

All information without guarantee, changes/errors excepted.

Every dog lover is able to find his dream-dog in an impressive diversity of breeds. As a rule the decision for one breed is not easy because often one must take a lot of wishes and point of views into consideration.
But if there really exists a kind of love at first sight in a meeting between men and dogs this fact is very important when someone makes a decision to get a French Bulldogs.

This breed is one of the strokes of luck in the breeding of dogs. This breed combines shortness, pleasant appearance, power and elegance. The French Bulldog is not a lap dog, its keen behaviour and typical bright intelligence together with its great protective instinct make it an ideal dog for home and family. The French Bulldog is an avid walker and an tireless playmate for the whole family. They love children from the bottom of their hearts. As a companion for older people the French Bulldog shows its whole sensitivity. It feels fine even if long walks are not possible and it is always ready to share joy and sorrows with its owners. The whole appearance of this breed is genuine. Its nice bat-like ears and the short tail are natural and the smooth short hair does not need grooming. An easy dog to care for!

Because of its friendly character and its showy appearance the French Bulldog is a remarkable companion, attracting interest everywhere. In its history the fascination for this breed brought the dogs into highest society circles. If the French Bulldog was in the beginning in Paris the dog of the common people, old documents show that soon it was a favourite of kings, artists and rich citizens.
Even today the enthusiasm for the Bullys is steadily growing up. Proud friends of this breed, responsible breeders and recognized breed clubs seek to ensure the health and quality of the French Bulldog in many countries. An evidence for the charisma of this breed is the frequent use in advertising. Good products appearing with the image of a French Bulldog seem to attract more buyers.

The high demand and the increasing number of puppies are on the first impression a good confirmation for those who love this breed. However, we should not forget that turning a dog into a »fashion statement« damages any breed. Uncontrolled breeding and trading in puppies for quick profits in a short time can destroy everything that makes the French Bulldog so loveable.
When purchasing a puppy you should always check critically whether the breeding requirements required of reputable breeders are fulfilled. 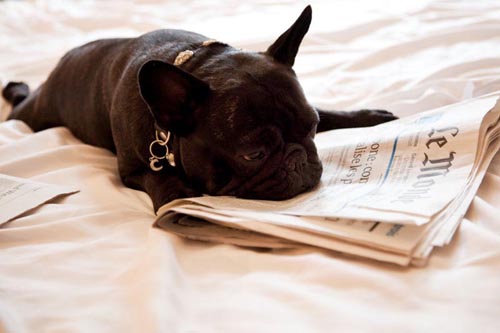 Like all other dog breeds the French Bulldog originated by crossing different breeds. An important result of those breeding were lightweight specimen of the English Bulldog which were bred in weight classes differing considerably from the modern type of this breed today. These lightweight dogs mostly were sold to French dog enthusiasts so that a very light variety of Bulldogs developed there.

In England a Toy Bulldog Club was established by enthusiasts of these smaller and lighter Bulldogs. Here Toy Bulldogs appeared with erect ears which became typical for the French Bulldogs later on.

In the middle of the nineteenth century the lightweight type of Bulldogs had a lot of enthusiasts in the Paris area. Some of the dogs bred there actually found their way back to England in order to encourage the breeding of Toy Bulldogs.
Then in Paris some rather unknown breeders crossed domestic dogs out of the Terrier-/Griffon-group and created surprisingly fast a small molossian dog with remarkable ears, carried erect, which was quite different to Bulldogs in temperament and appearance.

In 1880 the first breeding society was founded in Paris. The first breeding records dates from 1885 and in 1887 the first dog was shown. In 1898 the first European French Bulldog standard was published and in the same year the French Bulldog was acknowledged by the Societé Centrale Canine as an autonomous dog breed.
[The French Bull Dog Club of America wrote the frist breed standard anywhere in 1897, when the FBDCA was founded and the breed recognized in the US by the American Kennel Club]

An important influence on the breed came from outside. American dog lovers discovered the new breed in Paris and brought it into the USA. Dog enthusiasts from the upper class were excited and the demand for puppies was so great that puppy buyers were sent to Paris and paid impressive prices for showdogs. We do not know much about the quality of these litters. But it is certain that the buyers took only such specimens as could meet the expectations in America. A lot of pictures were published in dog magazines about these dogs announcements about the imported dogs and price lists were published too. This targeted demand certainly has had its influence on the breeding in France. It is impressive that the American photographs of these imported dogs show that the appearance of the French Bulldog has stayed nearly unchanged in the last 100 years. The colour palette of the coat is nearly the same as in the currant standard. Already at that time there were brindled, pied and fawn dogs.

The French breed, Bouledogue Français, became international. In America and Europe enthusiasts and breeders joined together in special clubs and dedicated themselves to this attractive breed.

In Germany the history of breeding of French Bulldogs is closely connected with the work of Max Hartenstein from Berlin and the successful efforts of the International Club for French Bulldogs (Internationaler Klub für Französische Bulldoggen e.V.) which was able to celebrate its 100th anniversary in 2009.